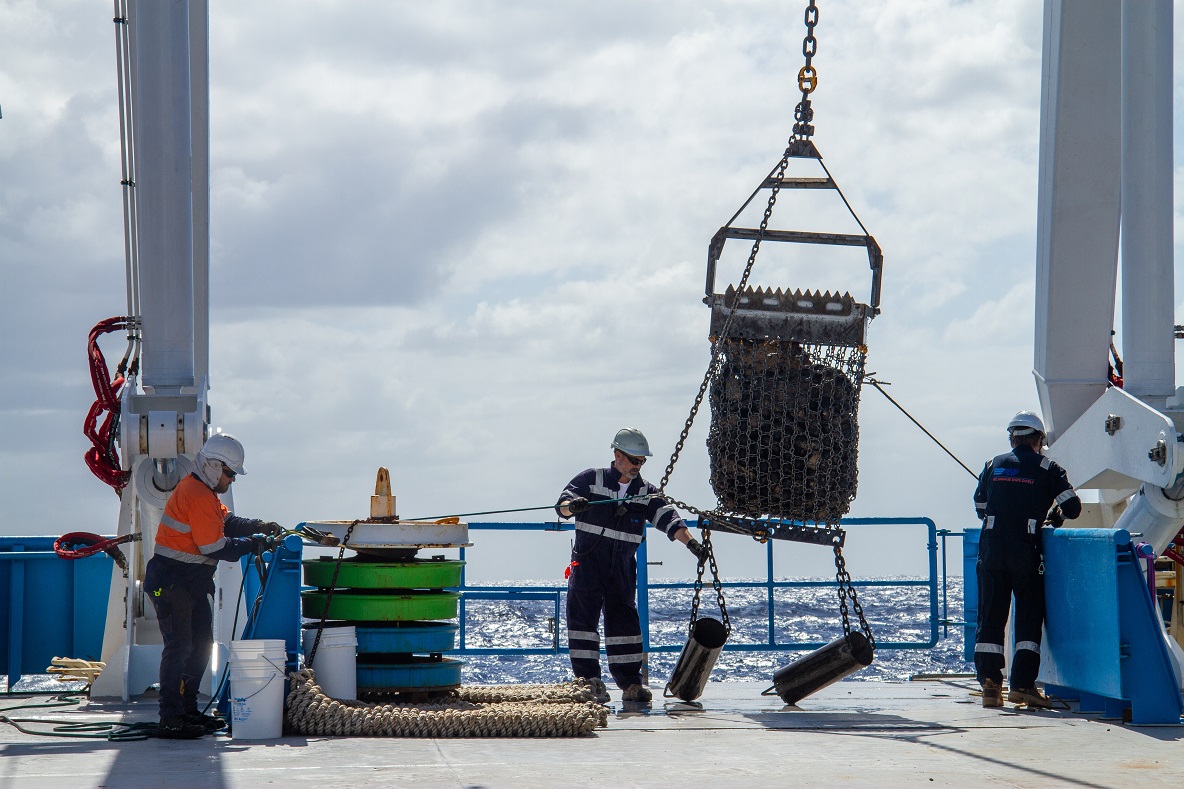 Scientists arriving in Brisbane after a 28-day voyage to the Coral Sea are amazed by their discoveries in the deep sea, including 5km deep seafloor canyons, unnamed volcanic seamounts, and likely new species of deep-water coral.

The discoveries came on top of the main work of the voyage on the CSIRO research vessel (RV) Investigator, collecting rock samples from volcanic seamounts to enable better understanding of how the region formed, and surveying the distribution of important marine habitats.

The voyage included visits to the waters of Papua New Guinea, Solomon Islands and New Caledonia, with surveys undertaken along two seamount chains that stretch from Sydney to a massive underwater volcanic plateau near PNG.

The voyage’s Chief Scientist, IMAS Associate Professor Jo Whittaker, who led a science team of 35, including researchers from Australian and Scottish universities, said the voyage had been an outstanding success.

“We set off with an ambitious program of deep-water sampling and have collected an impressive haul of seafloor materials for further study,” she said.

“We covered 4500 nautical miles – about 8300km - completed 55 rock dredges (image, left, the dredge underwater. Credit: CSIRO) and collected over 650 rock samples, some from areas that have never been surveyed before, including collecting rocks from up to 4500m deep.

“These rocks from seamounts in the deep ocean will help us to answer important questions about the history of the Coral Sea and its formation many millions of years ago,” Associate Professor Whittaker said.

The rocks collected included samples of the Earth’s mantle as well as from an area where the seafloor was believed to have been spreading, and from seamounts rising thousands of metres from the seafloor (Image, below, seafloor map of Louisiade Plateau showing volcanic cones. Credit CSIRO).

“Understanding the formation of the seamounts and the plateau they start with will give us a better understanding of similar features on land and what impact they might have on resource development,” Associate Professor Whittaker said.

“The rocks we collected will provide materials to study for many years to come.

“The voyage will also deliver a range of benefits for our Pacific neighbours, including mapping large areas of the region’s seafloor, cataloguing deep-sea corals, and completing detailed observations of marine life such as seabirds.

“Several of the deep-sea coral samples we collected (Image, left, deep sea coral. Courtesy CSIRO) are thought to be new species and will now be sent for further analysis and identification,” she said.

In an innovative program, two teachers on board the voyage shared the research in real time with students via video links with schools across Australia and the United Kingdom.

The teachers, who were participating in the CSIRO Educator on Board program, connected with over 20 schools and around 1000 students during the voyage.

“It was an amazing experience to work alongside scientists and crew on a research vessel at sea and to be hands-on in assisting with important research for understanding our oceans and environment,” Ms Belshaw said.

(Photo, right, a Bridled Tern, one of over 14000 birds recorded during the voyage. Credit Eric Woehler, BirdLife Tasmania)

“This is something that I will take back into the classroom to inspire my students and show them where studies of STEM subjects can take them.”

The ship has a 6-day turnaround in Brisbane before sailing on its next voyage to study the East Australian Current.

This research was supported by a grant of sea time on RV Investigator from the CSIRO Marine National Facility.