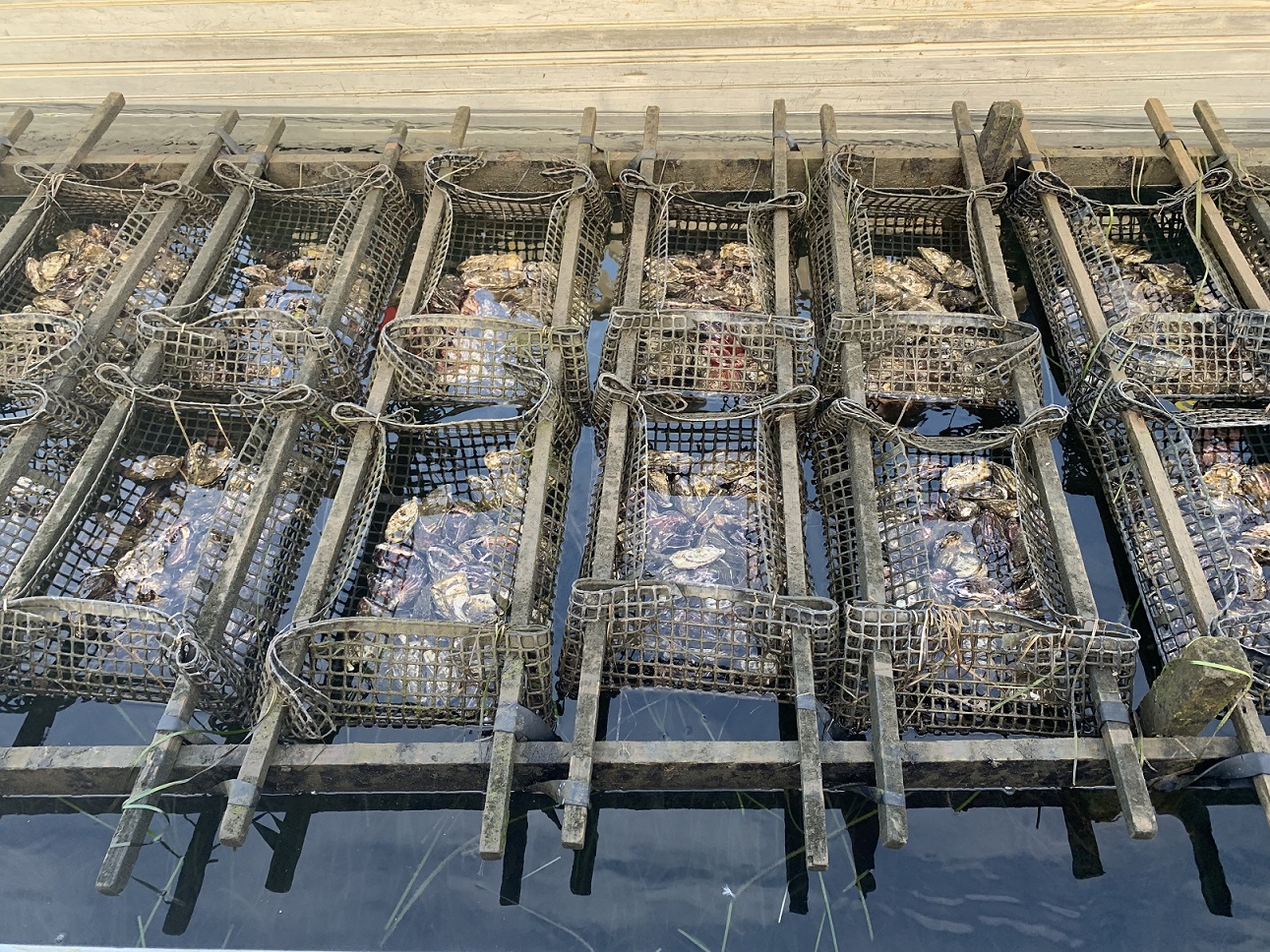 Disease-resistant Pacific oysters, selectively bred and reared at the Institute for Marine and Antarctic Studies (IMAS) in Tasmania, are now thriving in the waters off Cowell on the Eyre Peninsula – with their offspring set to safeguard South Australia’s oyster industry from the deadly Pacific Oyster Mortality Syndrome (POMS).

IMAS Molluscan Aquaculture leader, Dr Andrew Trotter, said South Australia had so far been spared the catastrophic effects of POMS but had been on high alert after the Ostreid herpes virus, the pathogen responsible for POMS, was detected in the Port River in Adelaide in 2018.

“It sent chills through the industry, even though the site was hundreds of kilometres from oyster farming areas,” Dr Trotter said.

“While it is not a risk to human health, POMS is highly contagious and rapidly fatal to Pacific oysters. When it struck NSW in 2012 it sent shockwaves through Australia’s largest oyster industry. Then in January 2016, it was detected in Southern Tasmania and quickly spread to growing regions on the East Coast, causing oyster mortalities of up to 95% on infected farms.”

ESTABLISHING THE FIRST LINE OF DEFENCE

When POMS hit Tasmania in 2016, the industry and researchers leapt into action, establishing an industry-led research collaborative to deal with the crisis. Funded by a Cooperative Research Centre Project (CRC-P) grant, a key focus of the program was to selectively breed Pacific oysters for disease resistance to POMS.

“The breeding program was set up at IMAS Taroona where Australian Seafood Industries and IMAS had long been collaborating on the selective breeding of Pacific oysters – so most of the elements were already in place to do the work,” Dr Trotter said.

“It has led to an excellent POMS recovery in Tasmania, and we now see much of the industry nearly back to business as usual,” Mr Cunningham said.

“By 2019, farming operations in Tasmania were essentially back to normal. However, even with no POMS in growing areas in South Australia, biosecurity regulations prevented us from sending the disease resistant families there – so it remained a high-risk growing area.”

“A key issue is the way selective breeding is done. The ASI oyster families are ‘challenged’ in disease outbreaks on Tasmanian farms, with the survivors used for breeding the next more resistant generation. But a small percentage of the survivors remain positive for the Ostreid herpes virus, which is known to lie dormant before becoming active again.” Dr Trotter said the spread of POMS is not well understood and the potential for vertical transmission, from parent to offspring (spat), was a valid reason for South Australian biosecurity regulators to ban the import of spat from Tasmania.

“In 2016, when the first ASI families were bred from broodstock raised in the POMS-infected zones in Tasmania, we were mindful that the larvae and spat could get the disease – but we didn’t see any vertical transmission of the disease.

“We were hearing the same story in 2018, when talking to our colleagues at IFREMER in France and Cawthron Institute in New Zealand,” Dr Trotter said.

“We realised the risk of vertical transmission was really low, with thousands of batches from spawning events in France, New Zealand and Australia showing no evidence of disease transmission.”

The research team worked with colleagues in France and New Zealand, and the Tasmanian Department of Primary Industries Water and Environment (DPIPWE), to let regulators know about these results so they could make evidence-based decisions. The research outcomes have since been published in Aquaculture Research.

Meanwhile, the industry was also finding their test results on spat were all coming back negative. This prompted strong lobbying from the South Australian oyster industry to get our most resistant 2020 families into South Australia and, in March 2021, State Government approval was given.

“Before leaving Tasmania, the spat were screened for Ostreid herpes virus, then sent from our IMAS Biosecure Facility to the South Australian Aquatic Biosecurity Centre at Roseworthy for a month of quarantine,” Dr Trotter said.

“The spat were screened again for the virus before finally being released at Cowell in April this year. Since then, ASI have conducted regular checks on the stocks, which are performing well. They should be ready for breeding in late 2022.”

The stock now represent an extremely valuable resource for South Australia if a POMS outbreak occurs in the State’s farming areas of South Australia.

“The best result will be to see the disease resistance in our selectively-bred Tasmania oysters directly transferrable to those in South Australia,” Mr Cunningham said. 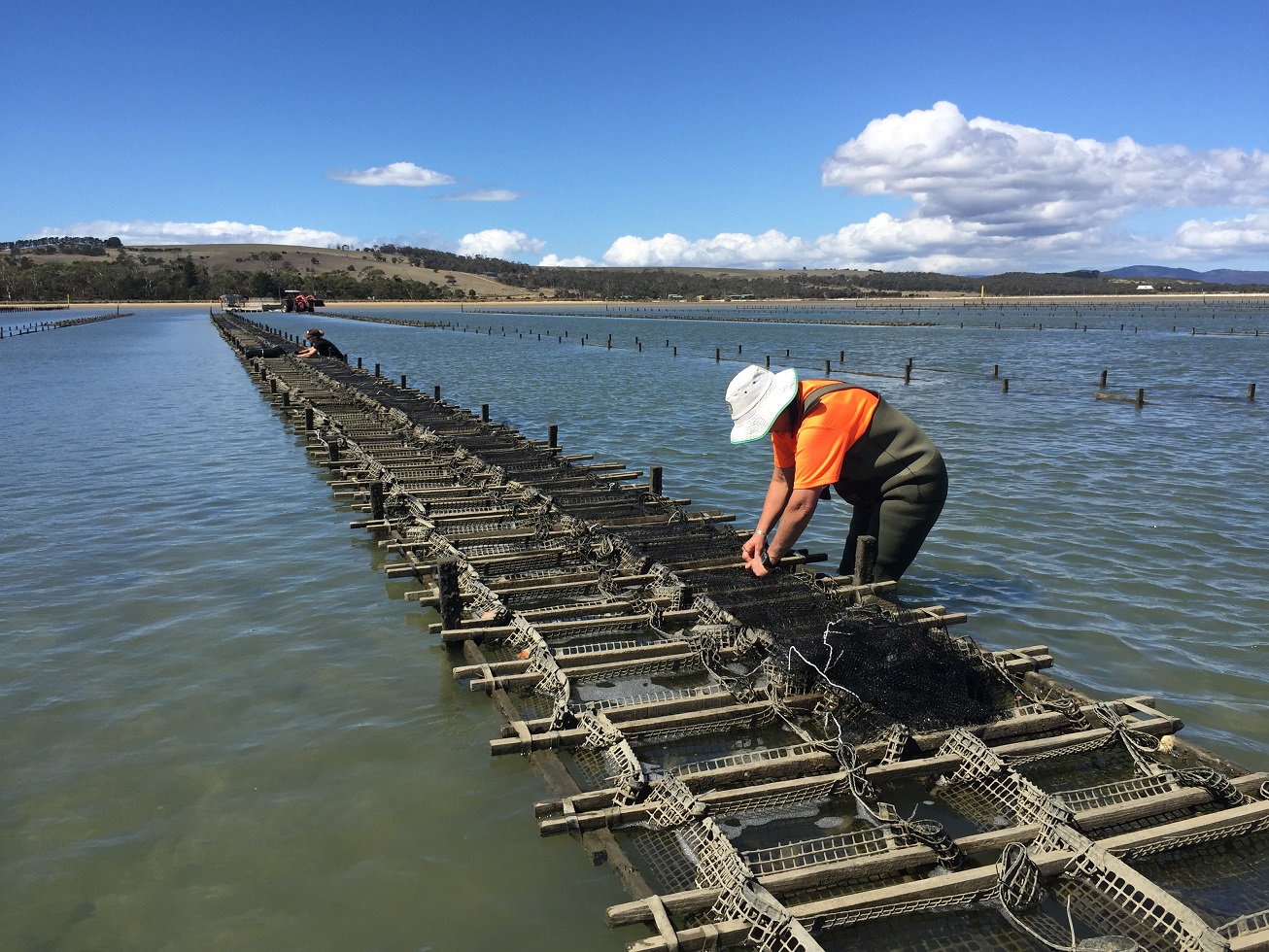 This project was also partially funded by the Fisheries Research and Development Corporation on behalf of the Australian Government.