In case you missed it, here's what we’ve been up to in December and January. It’s been another challenging summer here in Australia, and certainly for our scientists and staff organising or preparing to join voyages to the Southern Ocean and Antarctica.

For some, the COVID situation has seen the cancellation or postponement of voyages many months in the planning. For others, the pandemic has meant being landbound in their country, and working with limited shore-to-ship connectivity, to achieve the best outcomes for science.

But there has also been a glimmer of hope, in the shape of a pink handfish, which hasn’t been spotted in the wild for over two decades…

PINK HANDFISH SEEN FOR THE FIRST TIME IN 22 YEARS It's been 22 years since anyone has seen the very rare and threatened pink handfish Brachiopsilus dianthus in the wild. This rare anglerfish hasn't been seen since 1999, when it was spotted by a diver off the Tasman Peninsula in around 30 metres of water.

An IMAS marine scientist made the ‘needle in a haystack’ discovery while analysing video footage from a baited remote underwater stereo video used in the survey, which was led by IMAS marine biologists, Associate Professor Neville Barrett and Dr Jacquomo Monk.

The handfish was previously thought to exist in depths of 15-40 metres off south east Tasmania, but the recent footage was captured in the Tasman Fracture Marine Park off the south west coast at a depth of 120 metres.

“This is an exciting discovery and offers hope for the ongoing survival of pink handfish, as clearly they have a wider habitat and distribution than previously thought,” Assoc Prof Barrett said.

The finding was part of a joint survey of the marine park conducted by IMAS and Parks Australia. 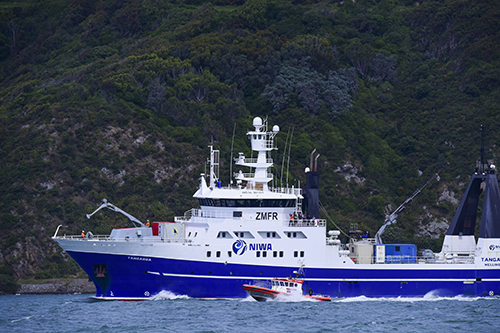 During November 2021 in the Southern Ocean, researchers physically or virtually onboard New Zealand’s National Institute of Water and Atmospheric Research (NIWA) RV Tangaroa were investigating the Macquarie Ridge Complex within and around the Macquarie Island Marine Park.

IMAS Emeritus Professor Mike Coffin, who co-led the voyage remotely from shore with Professor Hrvoje Tkalčić from ANU, said the information the scientists gained during this and the 2020 CSIRO RV Investigator voyage will improve earthquake and tsunami hazard assessments.

“As we’ve seen with the recent eruption of the underwater volcano off Tonga, better hazard assessments will benefit at-risk communities in our Pacific islands and along the New Zealand and southeast Australian coastlines, as well as Macquarie Island itself,” he said.

Emeritus Prof Coffin said the science party and ocean bottom seismometer (OBS) technicians for the RV Tangaroa voyage were dispersed across Australia, China, UK and USA, and unable to join the voyage due to COVID restrictions.

“It was quite a matrix coordination exercise, with limited communication options between RV Tangaroa and our global science party, and the entire shore-based science party on 12-hour daily watches for the duration of the one-month voyage,” he said.

“We also experienced a six-day medical evacuation, which reduced our research time significantly. Fortunately, the crew member made it safely ashore to a hospital.” The project is led by scientists from ANU Research School of Earth Sciences and IMAS at the University of Tasmania.

Data acquisition involved two CSIRO MNF voyages, one in October 2020 on the CSIRO research vessel Investigator, and one in November 2021 on RV Tangaroa. This included ocean bottom seismometer deployment in 2020 and retrieval in 2021 (pictured), multibeam bathymetry and backscatter, sub-bottom profiling, gravity and magnetics.

“While overcoming the challenges on this recent voyage took an intense effort, both voyages have resulted in the first high-resolution maps of the seafloor in this very remote and wild part of Australia,” Emeritus Prof Coffin said. 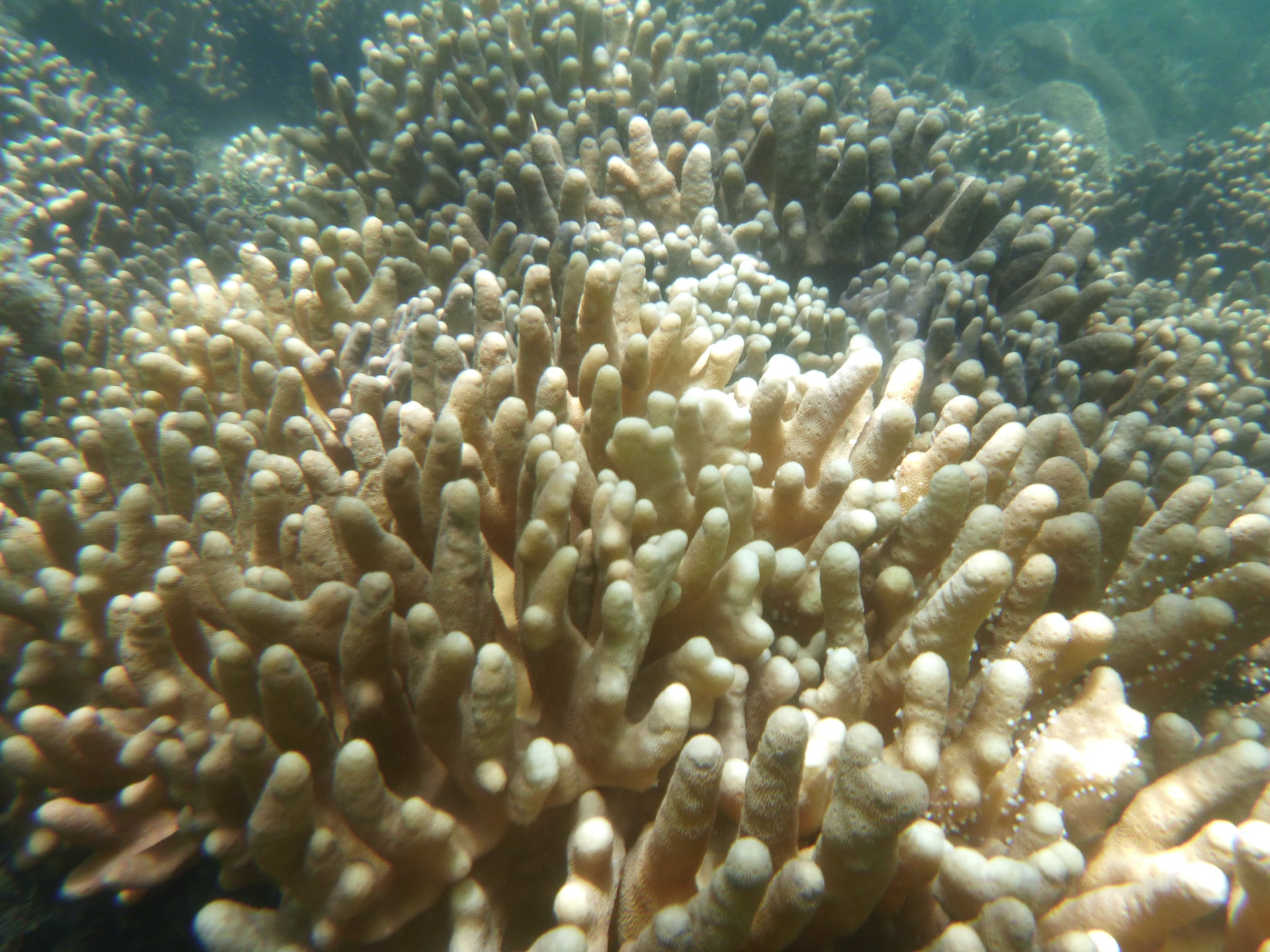 New research has revealed how marine heatwaves are impacting Pacific Island communities, and the increasing potential threats to the region and its food security under climate change projections.

“But in the absence of greenhouse gas emissions reduction there is likely to be a time, in the next few decades, when predictions and adaptation options may be insufficient for Pacific Island communities to usefully respond to the increasing severity of marine heatwaves as the ocean continues to warm," he said.

“The emissions pathway we ultimately take over the next couple of decades, as a global society, will be central to when that is likely to happen.”

Image: An example of bleached coral, taken on the Great Barrier Reef by Nico Smit (UnSplash)

With the summer fishing season in full swing, fishers have been jumping into some citizen science to contribute to our research at IMAS – from reporting black splotches in sand flathead fillets, to donating fish frames and reporting tagged lobster catches. 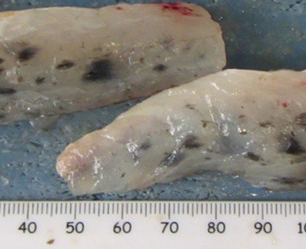 Recreational fishers across Tasmania have been increasingly reporting black splotches (melanisation) in Sand flathead. IMAS researchers are investigating this condition through our Black Fillet Project, to find out what causes melanisation in Tasmania, if other species are affected, and how extensive it is.

Fishers are helping us answer these questions by logging their melanisation sightings through our online form. 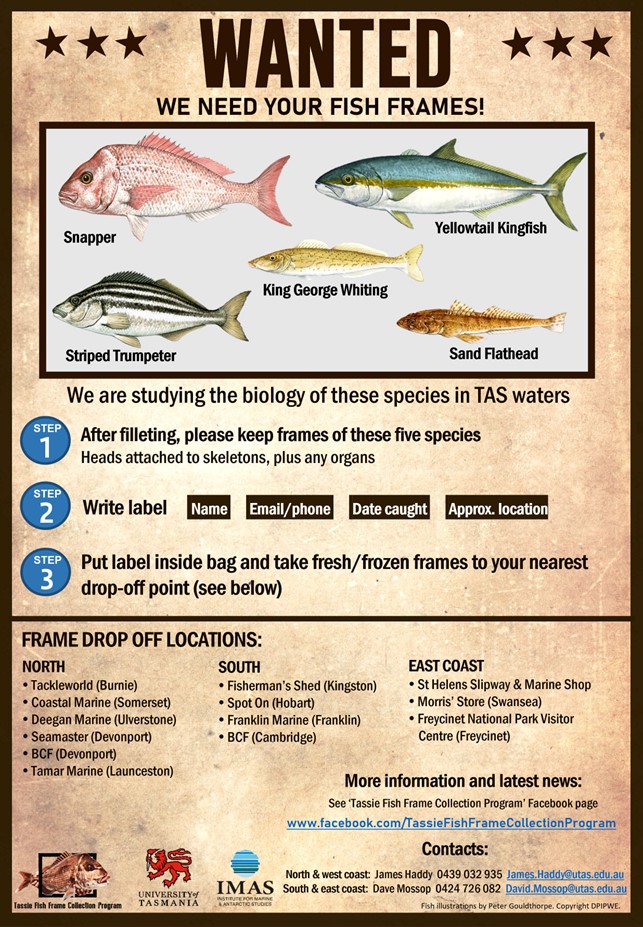 The IMAS Tassie Fish Frame Collection Program is calling on fishers targeting Sand flathead and Striped trumpeter, as well as emerging species like Snapper, King George whiting and Yellowtail kingfish, to donate the frames of the fish they keep.

The fresh or frozen frames of legal-size fish, including their head, skeleton and guts, can be donated at 13 drop-off sites around Tasmania.

Our scientists can gather information on the age, growth and reproduction from the fish frames of these species, and this helps us understand fish stocks.

Tag data from recaptured lobsters across Tasmania helps us understand lobster size range and, most importantly, size changes over time.

This allows scientists to estimate lobster growth rates on a regional scale, which is vital to our rock lobster stock assessments in Tasmania. These assessments inform fishery management.

Caught a tagged lobster? Find out how to report it, support our research, and be a winner here

Three decades ago, two IMAS scientists played a pivotal role in creating Tasmania’s first four marine reserves. Today, the method they developed to monitor these and surrounding marine ecosystems is used around the world.

“At the time, the extent of human impacts on reef systems was a real unknown, both globally and locally. So [we] jumped at the chance to be part of this experiment – which ultimately evolved into one of the three longest-term reef monitoring programs globally, with annual surveys over the past 30 years,” Assoc Prof Neville Barrett said. A new study has found that offshore waters along our south east and north coasts are the best locations for the potential expansion of Tasmania's salmon aquaculture industry.

The research considered biophysical suitability alongside other marine uses and ecological values, finding that most opportunities for salmon aquaculture generally reside in deeper offshore waters along Tasmania’s coast.

IMAS, in collaboration with the University of Tasmania and the Tasmanian Government, conducted the study to help government understand the potential growth opportunities of salmon farming in Tasmanian waters.