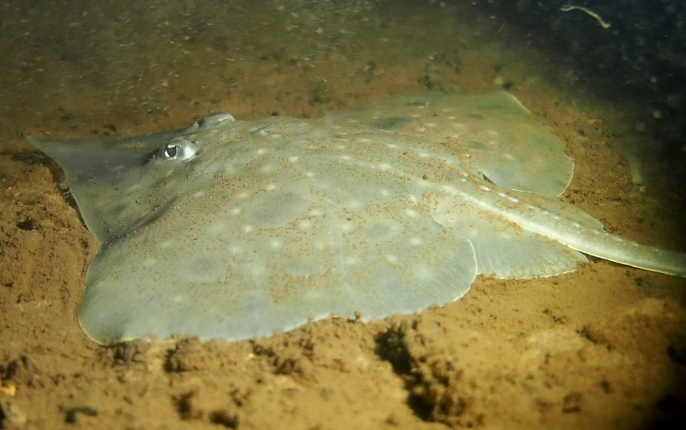 The endangered Maugean skate is a unique creature that has only been recorded in Macquarie and Bathurst Harbours in Tasmania, but new research reveals it now only survives in Macquarie Harbour.

In a new study, Institute for Marine and Antarctic Studies (IMAS) researchers set out to detect the presence of Maugean skate DNA in Bathurst Harbour, where only four individuals have ever been seen and none have been sighted since 1992.

“Maugean skates have one of the most limited distributions of any known species of shark, ray or skate in the world, and are adapted to the unique environment of western Tasmanian estuaries,” said IMAS researcher and lead author of the report, Dr David Moreno.

“Although it was first discovered in Bathurst Harbour, the Macquarie Harbour population has given us the most knowledge about the species. But to evaluate their vulnerability and help focus conservation efforts, it is critical for us to know whether the Maugean skate is still present in Bathurst Harbour.” To find the elusive skate, IMAS researchers collected water samples in Bathurst Harbour in November 2021­ and February 2022, then tested them for the presence of Maugean Skate DNA and consulted with CSIRO researchers on their findings.

“Despite very extensive sampling, we only detected minute traces of Maugean skate DNA, and this was most likely only remnant traces of biological material such as egg cases that remained in the sediment, or a few live individuals at the most,” said IMAS researcher and study leader, Professor Jayson Semmens.

“It is now clear that the only known population is in Macquarie Harbour, where conditions are impacted by historical and ongoing human activities.”

In recent years, research has shown environmental conditions in Macquarie Harbour’s water column have deteriorated due to decreases in dissolved oxygen levels.

These studies have demonstrated that multiple factors influence the oxygen levels in the harbour, including altered and regulated river flows from hydroelectric production, and increased nutrient loading from salmonid aquaculture operations.

“Our earlier research found evidence that the Maugean skate’s survival may be impacted at all of its life stages by deteriorated oxygen levels, both on its own or through interacting with other environmental factors,” Prof Semmens said.

Along with these dissolved oxygen declines and contributing factors, the Tasmanian Government’s Listing Statement for Zearaja maugeana (Maugean skate) notes other threats to skate and its habitat in Macquarie Harbour. These include heavy metal pollution linked to historic mining runoff, interactions between the skates and fishers, introduced species, stochastic (random) events and climate change.

“The consequence of this latest research is that we can no longer regard Bathurst Harbour as an ‘insurance population’ against any declines in the Macquarie Harbour population,” Dr Moreno said.

“Conservation of the Macquarie Harbour skates is our only option to ensure the survival of this unique species."

The Maugean skate is listed as endangered under Tasmania’s Threatened Species Protection Act and the Commonwealth Environmental Protection and Biodiversity Conservation Act 1999.

This project was supported with funding from the Australian Government under the National Environmental Science Program (NESP) Marine and Coastal Hub and Australia’s national science agency CSIRO, and the Tasmanian Government through the IMAS Sustainable Marine Research Collaboration Agreement (SMRCA).