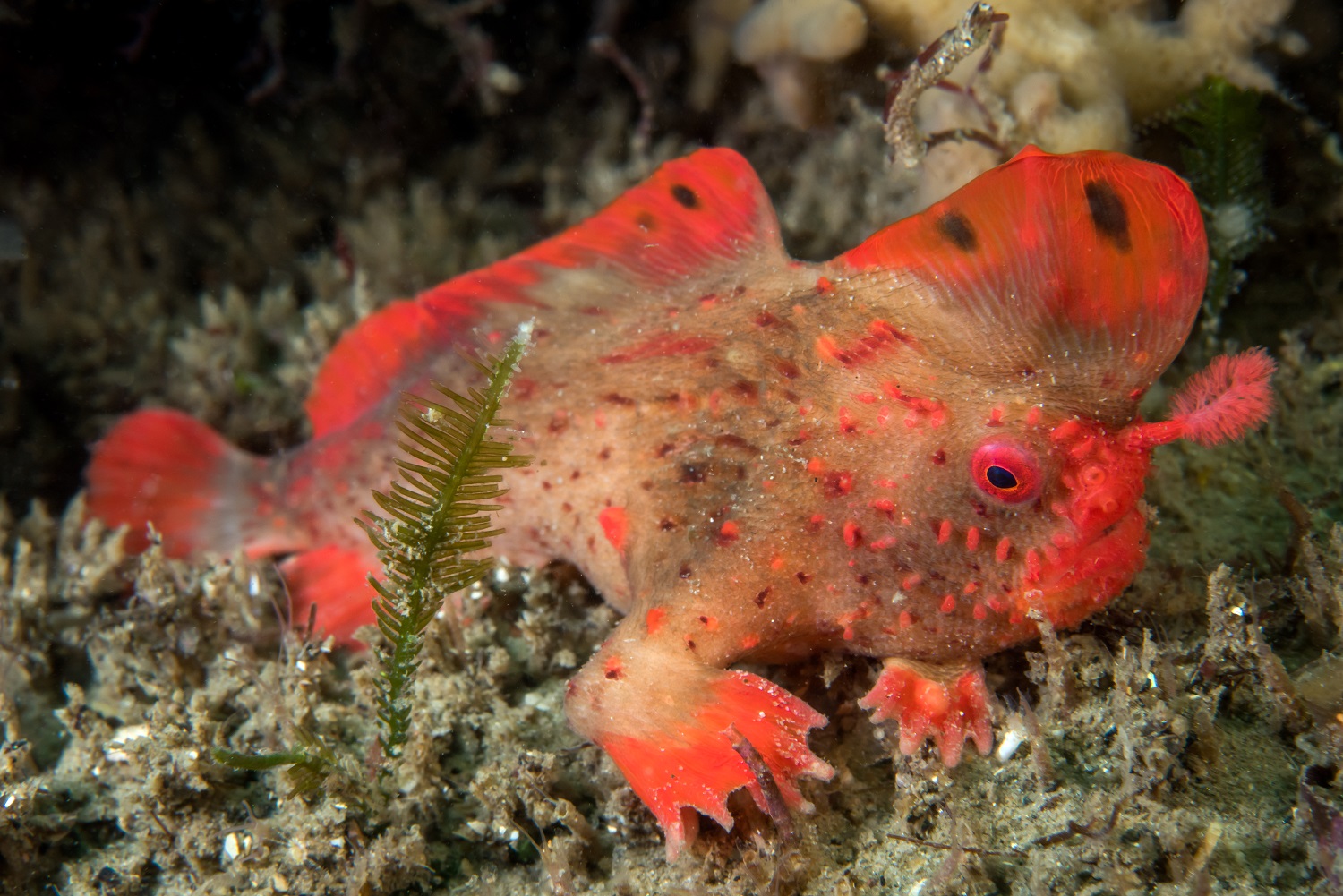 Two University of Tasmania PhD candidates are playing an important part in the mission to save three of Australia’s rarest fish – the Red, Spotted and Ziebell’s handfish.

Tyson Bessell and Olivia Johnson are on the Handfish Conservation Project team, an Institute for Marine and Antarctic Studies (IMAS) and CSIRO initiative focused on saving these quirky and unique fish, which are only found in south-east Tasmanian waters. 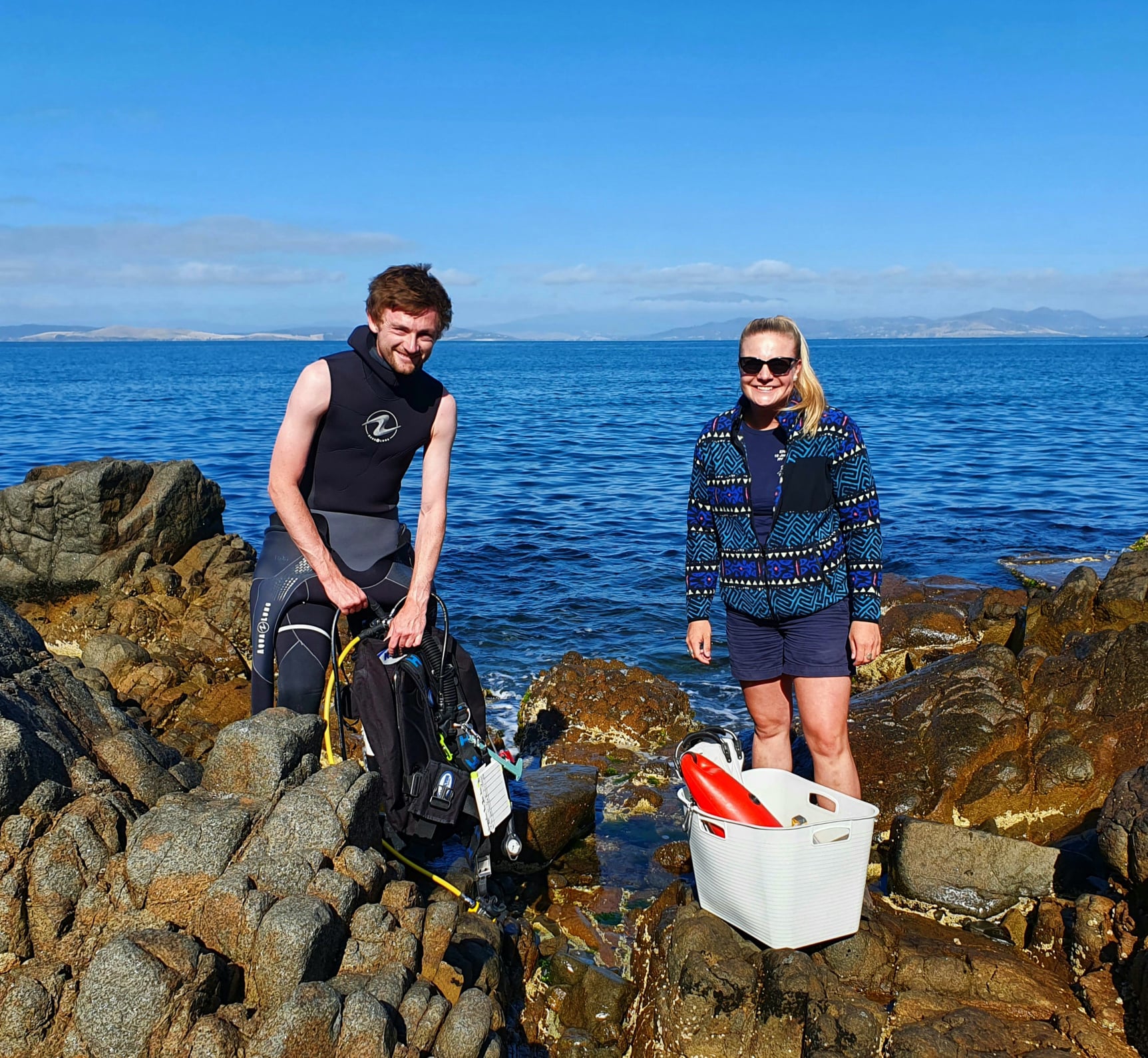 Tyson was determined to be a marine conservationist from the age of seven, after watching a documentary where a cartoon turtle suffocated on a plastic bag. Today, he is immersed in the ecology and conservation biology of the iconic and critically endangered Red handfish.

“I studied my Bachelor of Marine and Antarctic Science (Honours) at IMAS, and was lucky enough to be lectured by some of the world's leading marine scientists – and I loved the hands-on practicals,” said Tyson, pictured left with Olivia in the field.

“I’ve lived in Tasmania all my life, so jumping straight into my PhD working with a Tasmanian endemic species was an easy and exciting decision for me.

“I first saw the quirky little handfish while diving, and fell instantly in love with it. I feel privileged to be working with such a rare and special species, and to be at the forefront of research into conserving the species,” he said. “It doesn’t feel like work to me – and I get to see and work with one of the rarest fishes in the world every week.” Olivia (right) was raised in a diving family in Tasmania, and began pursuing her passion for diving and underwater photography in high school after getting her open water ticket.

“That’s where my love for the ocean really took off – and when I realised this could be a career,” Olivia said.

After completing her Marine Biology (Honours) studies at IMAS in 2018, taking on a PhD looking at ways to safeguard threatened reef species was a natural fit for Olivia.

“I have met so many inspiring people along the way, including those I study with at IMAS. It wasn’t a hard choice to continue my education here, especially because IMAS scientists are world-leaders in marine research.

“As a student, you have so many field research opportunities on incredibly important projects, including the Red handfish project,” she said. IMAS researchers Drs Jemina Stuart-Smith, Andrew Trotter and Cayne Layton, and PhD candidate Tyson Bessell are delighted to receive the funding, which will build on the success of conservation efforts, including the captive rearing program and handfish population monitoring.

“Since 2018 IMAS, CSIRO and Seahorse World have successfully hatched and reared over 150 Red handfish. And in 2020, 42 were released into their known habitats,” said Dr Stuart-Smith, who co-leads the conservation project with Dr Trotter.

“Continuing this work is vital to aid the recovery of Red handfish populations. So receiving this funding boost from the Australian Government will go a long way towards conserving the species through important initiatives like this.

“It will also drive the development of best practice guidelines for diving and snorkeling across known handfish habitat, and could open up new research and funding opportunities.”

For Tyson and Olivia, studying Red handfish conservation is more than a career, it’s fulfilling a dream sparked in childhood.

“We know how lucky we are to be doing what we love at IMAS, and making a real difference for these unique marine creatures. There is so much to be done, but we’re working with an incredible team and some keen citizen scientists – and we’re up for the challenge,” Tyson said.