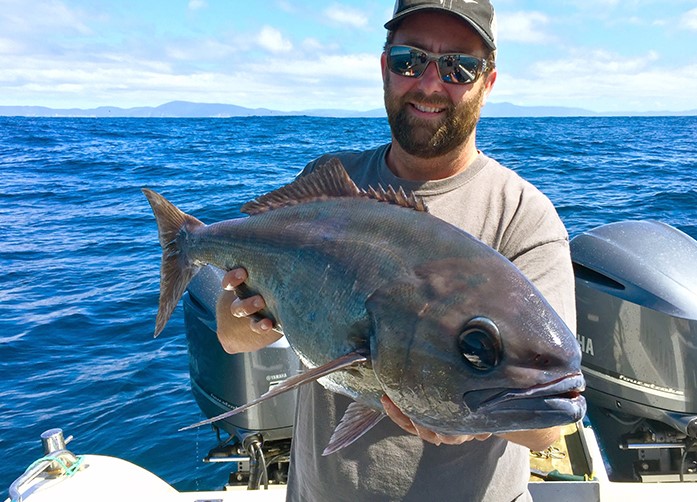 Tasmanian offshore fishers are more hooked than ever on Blue-eye Trevalla but are fishing less for species like Striped Trumpeter and Southern Bluefin Tuna, IMAS researchers have found.

The findings are the result of a 12-month study between December 2018 and November 2019, the second specific recreational offshore fishing survey conducted in Tasmania. The first was conducted in 2011/12.

Compared to the last survey, the number of fishing days (‘the effort’) and catch declined for tuna fishing, with the catch of the highly prized Southern Bluefin Tuna down by 22 percent, and the popular-to-eat Albacore down by 50 per cent.

“The migratory nature of tuna means that their availability to recreational fishers in Tasmania can change greatly from year to year,” lead author and IMAS Associate Professor Sean Tracey said.

“This snapshot of information is important to understand fish numbers and the changing marine environment to ensure they are managed sustainably.” Catch for the iconic Striped Trumpeter reduced by about 50 per cent and effort was down for bottom fishing at depths of between 50 and 150 metres, compared with 2011-2012.

“Interestingly since the last survey, there has been a shift to fishing in deep water shelf-edge zones for fish such as Blue Grenadier and Blue-eye Trevalla,” Assoc Prof Tracey said.

The survey complements the general recreational fishing surveys that are conducted every five years by IMAS researchers.

“There are approximately 100,000 recreational fishers in Tasmania and only a small proportion fish offshore. For this type of survey, we need a specific way to ‘find’ these fishers.”

The sample was randomly selected from the private vessel registration database maintained by Marine and Safety Tasmania. Over 2,000 fishers who own powered vessels over 4.5 metres long participated in the survey. Catch data from charter boat logbooks were also included in the research.

The study, which provides a snapshot of Tasmanian recreational fishing activities in offshore waters, was supported by the University of Tasmania, the Tasmanian Government and FishWise Fund.

Picture: Assoc Prof Sean Tracey shows off a Blue-eye Trevalla caught off the coast of Tasmania.