IMAS researchers have made up for time lost during the COVID-19 lockdown, working with commercial abalone divers to complete blacklip abalone dive surveys at up to 300 locations, despite Tasmania’s chilly late-winter conditions.

“We teamed up with four commercial abalone divers, and together we surveyed 200 sites in Eastern Tasmania in just over two weeks during August,” IMAS Research Fellow Jaime McAllister said.

The rapid assessment dive surveys are conducted to determine the extent of depletion in the East Coast abalone blocks, with the data informing Tasmanian Government decisions on how to best manage recovery of depleted sections of the Eastern zone abalone fishery.

“From the data, we can determine what proportion of the once-productive fishery could recover without intervention, which could include costly reseeding,” Dr McAllister said.

This year, six Eastern zone reporting ‘blocks’ have been closed to commercial abalone fishing due to overall declines in both catch and catch rates (catch per unit effort), and historically low catch rates since the 1990s. The recreational bag limit was also halved from 10 abalone to five. 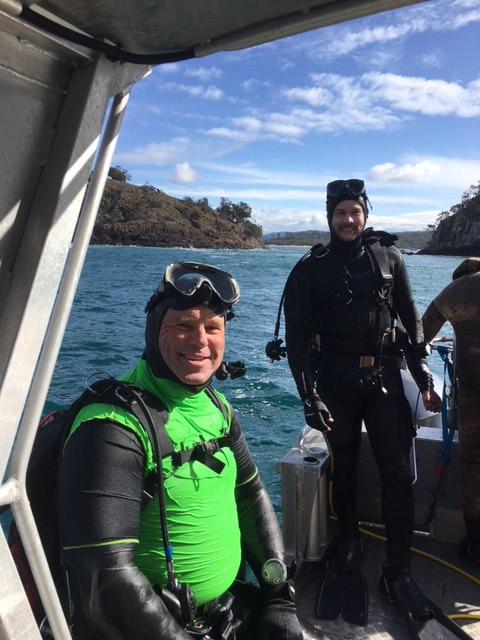 “To determine if sufficient remnant biomass remains over a high proportion of the known fishing grounds, we’re surveying about 300 sites, roughly 60 sites per block.

“These were selected based on identifying areas supporting medium-to-high catch rates up to 2017, from spatial GPS logger and corresponding catch data collected over the past seven years,” Dr McAllister said.

IMAS used rapid assessment methods such as ‘timed swims’ to effectively measure widespread recovery and abundance, rather than the belt transect method which is better suited to estimating absolute biomass.

“Belt transect methods are slower, with up to two sites possible per day, so are very expensive for confirming recovery over geographic scales,” Dr McAllister said.

“Rapid assessment methods enable a snapshot of abundance and size-structure data to be collected at a large number of sites within a short period of time.

“The method involves paired divers swimming for 10 minutes at each site, counting and measuring every abalone observed using a non-invasive measuring stick and scribe, while they are still attached to the substrate.

“This gives us sufficient time to count and measure each abalone we see, and provides a rapid snapshot across a broad spatial distribution,” he said.

In 2017, commercial fishery catch data showed that catch totals in key blocks were around 10% or less of the catches landed in the late 1990s or early 2010s. Abalone landed from these areas were highly prized in the mid-to-late 1990s for the emerging live fishery.

“This resulted in a substantial shift of effort, unsustainable levels of fishing pressure, and ultimately reduced abundance,” Dr McAllister said.

“Mortality following heat waves in 2009/2010 and 2015/16 compounded the problem in some areas, as has loss of habitat in some areas due to destructive grazing of the longspined sea urchin.”

The dive survey was achieved despite the challenges posed by the COVID-19 pandemic, and is another example of the successful collaboration between research and industry.