Science voyage to end in Perth after mapping 100,000 km2 of seafloor 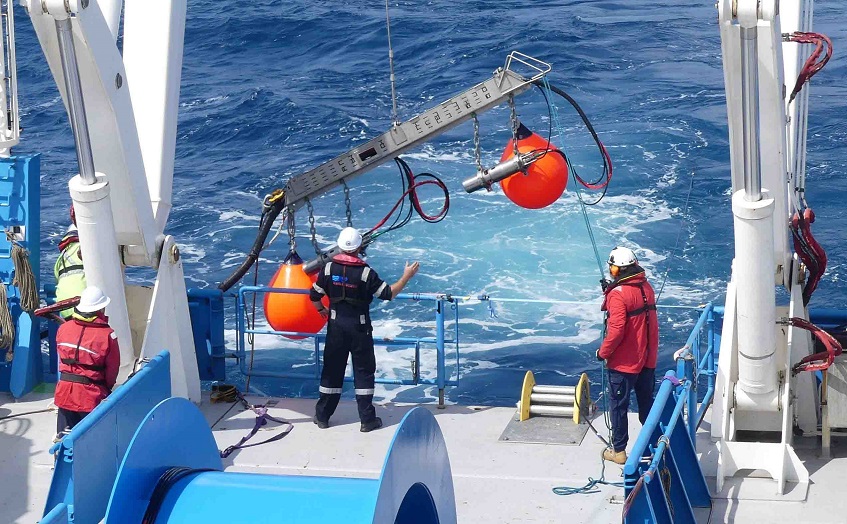 An IMAS-led team of scientists and students on board Australia’s research vessel Investigator will return to Perth tomorrow after a two-month voyage that mapped more than 100,000 km2 of Southern Ocean seafloor, much of it for the first time.

The main focus of the voyage was to study the ancient rifting, break-up, and separation of tectonic plates that split a giant, once-contiguous oceanic plateau into two major Indian Ocean seafloor features, Broken Ridge and the Kerguelen Plateau, to the west and southwest of Perth, respectively.

Together with rocks dredged from the seafloor, the new data will provide valuable insights into the geological history of the region.

The data and samples collected will also be used to address criteria relevant to consideration, under international law, of an area the size of Switzerland for inclusion in Australia’s marine jurisdiction.

Voyage Chief Scientist, IMAS Professor Mike Coffin, said data and samples from William’s Ridge, southeast of the Kerguelen Plateau, could inform deliberations by the United Nations Commission on the Limits of the Continental Shelf (CLCS) about Australia’s entitlement to a continental shelf beyond 200 nautical miles from the coastlines of Heard and McDonald islands.

“We mapped along the entire length of William’s Ridge, defining both its continuity with the Central Kerguelen Plateau and its southeastern terminus for the first time,” Professor Coffin said.

“This information, along with results from shore-based petrological and geochemical analyses of the rock samples we have collected, will be important criteria for any future submissions to the UN Commission.

“Therefore, the Commission did not consider it justified for William’s Ridge to be regarded as a submarine elevation that is a natural component of the continental margin.”

Professor Coffin said scientists and students from Australia, China, Denmark, Germany, Italy, Singapore, and USA were able to carry out a wide range of imaging and sampling during the voyage.

“The Kerguelen Plateau and adjacent William’s Ridge were once contiguous with Broken Ridge, which is now 2700 kilometres to the north after separating 43 million years ago.

“The research we have undertaken during this voyage will help us to better understand the fundamental tectonic, volcanic, and geodynamic processes involved in the evolution of this part of the ocean.

“The seafloor structures we have mapped are complex but have two consistent trends, one parallel to the axis along which the two features broke up and the other at an acute angle to it.

“After we return to port our exceptional multidisciplinary international team of shore-based scientists will begin analysing our data and samples from areas that have never before been studied in this level of detail,” Professor Coffin said.

The Investigator is Australia’s only research vessel dedicated to blue-water research and is owned and operated by CSIRO, Australia’s national science agency. The vessel conducts research year-round and is made available to Australian researchers and their international collaborators.