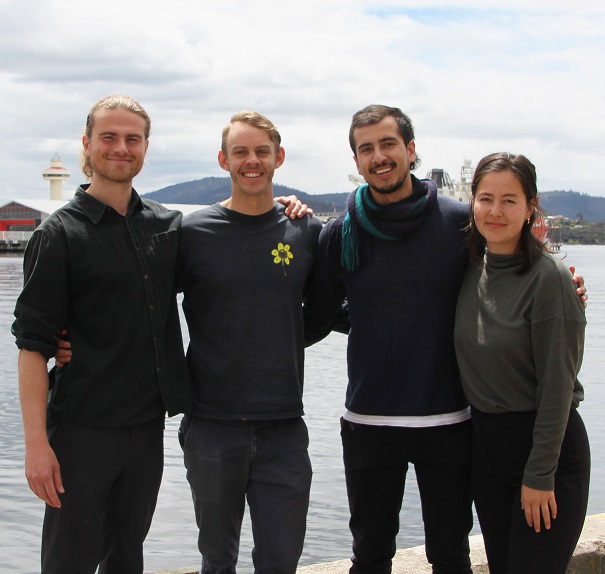 A team of University of Tasmania students has won US$250,000 as part of a prestigious international competition to help solve the climate crisis.

University of Tasmania team Blue Symbiosis was named one of 23 international winners for its concept, which aims to repurpose offshore oil and gas platforms to grow seaweed to extract carbon from our oceans.

Team leader and IMAS Bachelor of Marine and Antarctic Science (Honours) student, Joshua Castle, said the concept was inspired by the topic of his thesis.

“I researched the potential of repurposing oil and gas infrastructure to regenerative seaweed sites, which led to the conclusion that this holds real promise for both environmental and commercial reasons,” Mr Castle said.

“Decommissioning oil and gas infrastructure is an emerging $60 billion problem for governments and industries in which they are expected to share the costs. Seaweed has the potential to deliver vast environmental benefits for ocean health – but if it can’t be scaled, significant impacts on ocean health can’t be realised.

“Our concept aims to increase seaweed production to a scale large enough for it to have a significant impact on ocean health, and to harvest a proportion of the seaweed in 100-year construction materials, such as fire resilient bricks. This way, we can quantify the exact amount of carbon we store.” “Blue Symbiosis has developed an innovative yet commercially robust solution to one of the most critical climate questions we face – how can we reduce the amount of carbon stored in our oceans?” Professor Haward said.

“We are all incredibly proud of their efforts being recognised on the global stage and look forward to supporting them as they progress through to the next level of competition.”

The team’s submission was assessed by a panel of judges who considered the project plan, innovation, designs, ability to reach gigatonne scale carbon removal, team resources and capabilities.

Blue Symbiosis will now work on developing a prototype of its winning concept to enter in the major US$100 million XPRIZE Carbon Removal competition, open to innovators and teams across the globe.