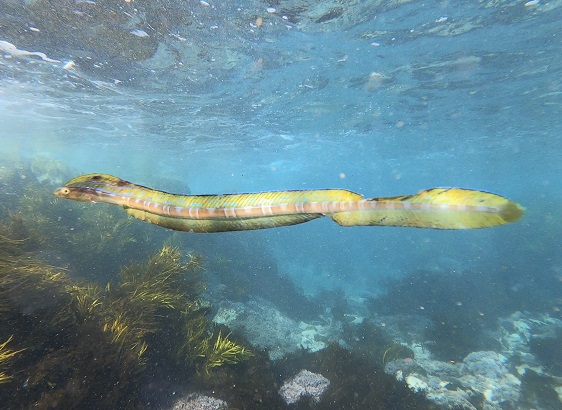 As the planet heats up, many marine plants and animals are moving locations to keep pace with their preferred temperatures. In the Southern Hemisphere, this means species are setting up home further south.

This shift alters what we see when we go snorkelling, and when and where we catch our seafood. Crucially, it also changes sensitive marine ecosystems.

But it’s not always easy for scientists to know exactly what’s happening below the ocean’s surface. To help tackle this, we examined tens of thousands of photographs taken by Australian fishers and divers submitted to citizen science programs over the last decade.

They revealed climate change is already disrupting the structure and function of our marine ecosystems – sometimes in ways previously unknown to marine scientists.

Species on the move

Warming over the Pacific Ocean has strengthened the East Australian Current over the past several decades, as the below-right animation shows. This has caused waters off Southeast Australia to warm at almost four times the global average.

There is already irrefutable evidence climate change is causing marine species to move. Understanding this phenomenon is crucial for conservation, fisheries management and human health.

For example, if fish susceptible to carrying toxins start turning up where you go fishing, you’d want to know. And if an endangered species moves somewhere new, we need to know so we can protect it.

But the sheer scale of the Australian coastline means scientists can’t monitor changes in all areas. That’s where the public can help.

Fishers, snorkelers and divers often routinely visit the same place over time. Many develop strong knowledge of species found in a given area.

When a new or unusual species appears in their patch, these members of the public can excel at detecting it. So our project set out to tap into this invaluable community knowledge.

The value of citizen science

The Redmap citizen science project began in Tasmania in 2009 and went national in 2012. It invites the public to share sightings of marine species uncommon in their area.

Redmap stands for Range Extension Database and Mapping project. Redmap members use their local knowledge to help monitor Australia’s vast coastline. When something unusual for a given location is spotted, fishers and divers can upload a photo with location and size information.

The photos are then verified by a network of almost 100 marine scientists around Australia. Single observations cannot tell us much. But over time, the data can be used to map which species may be extending their range further south.

The project is supported by the University of Tasmania’s Institute for Marine and Antarctic Studies, together with other Australian universities and a range of Commonwealth and state-government bodies.

The citizen scientists recorded 77 species further south than where they lived a decade ago. Many were observed at their new location over multiple years and even in cooler months.

For example, spearfisher Derrick Cruz got a surprise in 2015 when he saw a coral trout swimming through a temperate kelp forest in his local waters off Sydney, much further south than he’d seen before. He submitted the below photo to Redmap, which was then verified by a scientist.

Similarly, solo eastern rock lobsters have been turning up in Tasmania for some time. But Redmap sightings recorded dozens of individuals living together in a “den”, which had not been observed previously.

We also generated a map of the species shifts this revealed, and a downloadable poster summarising the findings. This allows the public – including those who contributed data – to see at a glance how climate change is affecting our oceans.

Citizen science has benefits beyond helping us understand changes in natural systems. Projects such as Redmap open up a community conversation about the impacts of climate change in Australia’s marine environment - using the public’s own knowledge and photos.

Our research suggests this method engages the community and helps get people involved in documenting and understanding the problems facing our oceans and coasts.

A better understanding – by both scientists and the public – will help ensure healthy ecosystems, strong conservation and thriving fisheries in future.

This article is republished from The Conversation under a Creative Commons license. Read the original article.